Continue reading the main story
See the article in its original context from
July 5, 1970, Page141Buy Reprints 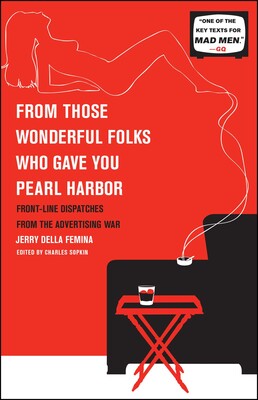 TimesMachine is an exclusive benefit for home delivery and digital subscribers.
This is a digitized version of an article from The Times’s print archive, before the start of online publication in 1996. To preserve these articles as they originally appeared, The Times does not alter, edit or update them.
Occasionally the digitization process introduces transcription errors or other problems; we are continuing to work to improve these archived versions.

In the early 1960's there was revolution in advertising. They've had them before. In fact whenever somebody gets a new idea on Madison Avenue, it's called a revolution. Exaggeration may be as much principle of writing about the ad game as of the ads.

Jerry Della Femina (rhymes with hyena) is the John Reed of this latest revolution. He has chronicled the rise of the downtrodden class —the workers, or creative people‐and the toppling from power of the parasites—the account men and other noncreative types who formerly ran the business. The revolution, Della Femina suggests, has opened the doors on Madison Avenue to the ethnic, far‐out kids who take dope, wear outlandish costumes and are crazed with the desire to write honest advertising. They have replaced the gray‐flannel, hard‐drink ing, older Wasp‐types, whose thing must have been false advertising.

Della Femina, who has his own agency—of the creative type, needless to say—and his literary partner, Charles Sopkin, have written of the upheaval in the language Della Femina knows best: the one‐liner. People outside the advertising business probably don't realize how hard it is to write a single line, often consisting of 25 words or less, but the one‐liner is the soul of the business today. It not only has to be mildly amusing (if it is too funny, somebody won't get it), but it also has to contain the major thrust of a campaign —“the concept,” as it is known. Millions of dollars are then spent in the media to make these one‐lines memorable.

My favorite one‐liner produced during this revolutionary period in American advertising history is: “It's the Real Thing.” What I like most about the new Coke slogan is the daring of the open‐ended comparative. The real thing compared to what—Pepsi, drugs, sex, life itself? The simplicity of the writing makes it sound like some copywriter's first thought; yet it may have been the 247th thought of a three‐man creative task force competing against four or five other teams of talent. Some of the finest minds money could buy have burned themselves out during the revolution thinking of similar great one‐liners.

Della Femina wasn't the author of “It's the Real Thing,” but he is so fluid with one‐liners that he's obviously a good ad man. The title of his book is one of his claims to fame in the business. Unfortunately, bombed; the Japanese client (Panasonic) didn't buy it. Who will ever forget Della Femina's one‐liner for product called “Pretty Feet“: “What's the ugliest part of your body?” Or what he wrote for Feminique, the vaginal spray. For the moment, escapes me.

Still, Della Femina's book is the real thing about advertising. It has a fragmented, nonlinear quality that may puzzle readers used to linear exposés of the business, like David Ogilvy's “Confessions of an Advertising Man.” The mystery is cleared up when you realize that the authors have strung together a series of anecdotal vignettes, or commercials. Reading these “Front‐Line Dispatches From the Advertising War” is like watching a television set for a night.

His experiences in the world of advertising are a lot funnier than Darren's (in television's “Bewitched”) but not up to Putney Swope's. As it is on television, the situation comedy is continually being interrupted for 60‐second discussions of the products handled by Jerry Della Femina & Partners (his agency's name), his friends in the smaller “boutique” agencies and his enemies in the bigger noncreative shops.

The stuff in between the commer cials seems to wander all over the field of advertising, as if the author sat down with a tape recorder and talked out everything he knew on that particular day. He indiscriminately mixes Della Femina's laws (“If you got it, don't flaunt it”), advice on how to get a job, pop psychology, advice on how to keep a job, defense of the boutiques, problems with the network censors (he makes his continuing battles for Ferninique sound like one of the great civil‐rights causes of our time), advice on how to find a new job, the importance of being a Machiavelli, trade gossip, thumbnail sketches of scoundrels, four‐flushers, cowards and parasites. There are no heroes in this book, except possibly Della Femina.

Least convincing to me, however, is Mr. Della Femina's explanation of the ideological underpinning of the revolution. Telling the truth in ads was a breathtaking idea when Doyle Dane Bernbach did pioneering work in this approach in 1959 with the Volkswagen campaign. Bill Bernbach made advertising history when he admitted that all cars weren't perfect. But how far can Madison Avenue go with that stuff? Can agencies begin telling the people not to buy too much of things they don't need in the first place, the basic principle of advertising since the Industrial Revolution? Whether a copywriter is obsessed or not obsessed with the truth, commercials still have to be limited to 60 seconds. With time restrictions like that, there is a tendency to tell half the truth.

The major revelation in Della Femina's ripping the lid off one of the most public of professions is that men on Madison Avenue grovel with fear. An agency president once told Della Femina, “I start worrying about losing an account the minute I get it. The minute I sign the contract, I'm one step closer toward losing it.” In one of his best one‐liners, Della Femina describes a colleague as “The Mt. Everest of Fear.” Every chapter. no matter what its heading, reeks with fear, which should come as no surprise. The secret of success in advertising writing is repetition.

If Della Femina wants to make fun of these fear‐ridden wretches, earning Their $50,000 a year plus $5,000 expense accounts, smoking their joints, not making it with their models and secretaries contrary to what outsiders assume, running to their shrinks on Wednesday afternoon (“The day is going to come,” he predicts, “when a bunch of shrinks decide they ought to start an agency”) —well, that's his business. But somebody should say a good word about fear as the cornerstone of advertising.

Fear itself drives the best creative people into advertising. Without the fear of not being able to earn living doing their thing in fiction, art or music, why else would all of Della Femina's

The New York Times Book Review friends—who usually turn out to be the most gifted in any agency he's worked at — have gone into the field?

Only about 10-30 percent of the planned strategies are ultimately realized. However, the recipes for success often seem quite simple. If this is the case, the question inevitably arises as to why our success rate is often so low? Moreover, the average lifespan of an organization is shorter than a human life. What can organizations do to perform better and how can we ensure our survival and develop the ability to transform and adapt, especially in the age of digitalization and Industry 4.0? However, top management spends less than three percent of their time shaping the long-term future. Even if this figure is questionable, it is an indicator that there is enormous potential to create our future much better. It is our challenge as managers or entrepreneurs/intrapreneurs to think without limits and to prepare and shape the future. Any straitjacket in thinking, especially in innovation, must be eliminated. It is time to familiarize you with the concept of the Strategic Control Loop and the TUDAPOL principle: unlimited thinking, agile development, lean production and operation. This principle should enable you to meet the management challenges in the age of globalization, increasing complexity and digital transformation.